Faithful to our tradition while evolving our future

Since E.C.Emmerich Company was founded in 1852 the world has changed. What remains the same is our focus on making the finest woodworking hand tools.

Join us on a quick tour through the many episodes of our company’s more than 150 year history. Then, we’re sure you‘ll better understand why we remain among the leading manufacturers of today‘s cabinetmaker‘s equipment and why every tool that leaves our house incorporates the collective contributions of five generations of innovative tool makers.

In the 19th century it was common for tradesmen, including cabinetmakers, to make their own tools. That custom included master woodworker Friedrich-Wilhelm Emmerich. He crafted his own planes and related tools.  Colleagues admired his quality work and sought to buy from him.  He obliged by making planes and other tools in small quantities for sale.

From about 1930 Max’s son, Friedrich-Wilhelm, managed their newly founded branch in England.  Adverse circumstances of World War II led to its separation from the main company. Also, about this time, our production and administration facility in Remscheid burned to the ground. Only with great dedication and effort by Karl Emmerich was the re-constructed company able to quickly re-establish its previous business success.

Since 1998, the now world-famous, time-honored brand of  E.C.E. is being successfully managed by the family‘s fifth generation owner, Hans-Jörg Emmerich.

All E.C.E. managers were and continue to be mechanical engineers acting with legendary expertise as well as an accurate knowledge of the industry. In this, they were always supported by a team of qualified staff possessing various technical disciplines. Today‘s production, in combination with standard machinery, utilizes proprietory equipment based on E.C.E.‘s own uniquely engineered machinery designs.

E.C.E. always keeps the specific needs of users in mind. Our users have always been the motivaters for every generation.  High performance is exhibited by consistent, exemplary workmanship, functionality and durability.

But that‘s not enough!  We believe the personal commitment of every E.C.E. employe involved in E.C.E.‘s value chain, is crucial to the enduring success of our brand. Woodworkers immediately recognize this commitment whenever they pick up an E.C.E. tool. No wonder, then, that products by E.C.E. today are considered uncompromisingly high-end woodworking hand tools.

In the future we will continue to maintain and expand our leading position in every international comparison. Technical innovations from E.C.E., therefore, are to be expected, just as they were in the development of the PRIMUS precision depth adjustment system.  Today, Primus series of planes set a high bar.

Others want to get better.
We want to stay better!

The company was founded by master craftsman Friedrich-Wilhelm Emmerich. 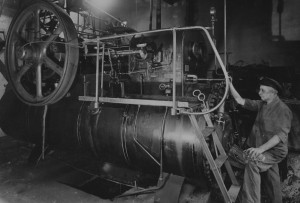 Always full steam ahead – A peak into the central machine room with its large steam turbine at the main branch in Remscheid-Hasten. 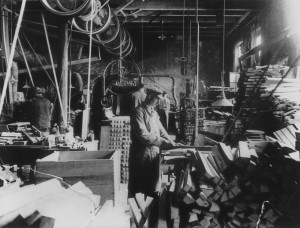 E.C.E.-Employees at work in the factory.

Friedrich-Wilhelm Emmerich, grandchild of our founder, manages our new subsidiary in England. 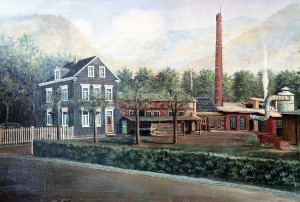 Adverse circumstances of World War II led to separation of the English branch. Also, our production and administration facility in Remscheid-Hasten burned down to the ground. 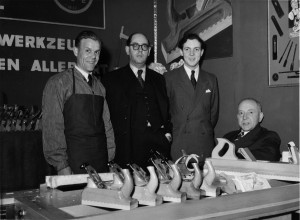 E.C.E. presented their tools at the fair in Hannover.

Right: Owner Karl Emmerich and left, beside him, his son Friedrich-Wilhelm Emmerich (great grandson of our founder). 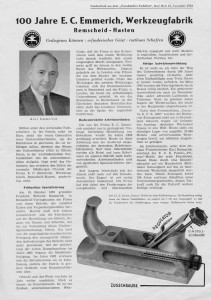 It was during this year that Karl Emmerich invented our PRIMUS-plane with its unique, anti-backlash precision depth adjustment of the plane iron. 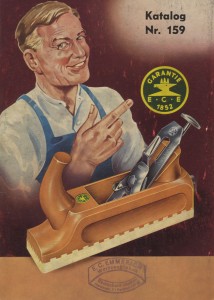 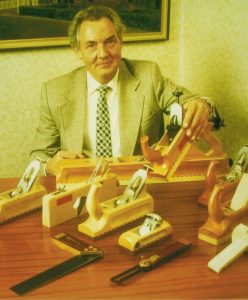 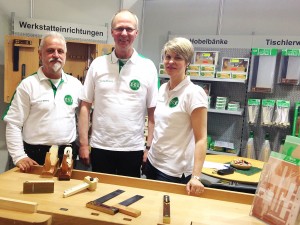 Since the mid-1990s, E.C.E. has exhibited at the tool fair Holz-Handwerk in Nuremberg one of the most important trade shows in our manufacturing sector.

Now world-famous, the highly respected E.C.E. brand is being successfully managed by fifth generation, Hans-Jörg Emmerich, as he merchandises the brand in E-commerce. 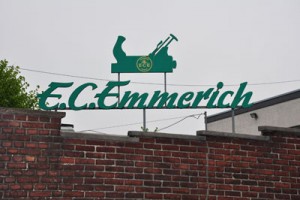 Since the E.C.E. Company was founded in 1852 the world has changed. What will never change is our organization‘s enduring commitment to make high-end tools for woodworkers.

FUNCTION AT IT'S BEST. RIGHT FROM THE BEGINNING.

All E.C.E. processed materials are meticulously tested for quality. Not overall, not generally, but component by component. No wonder that you always feel; the high quality in hand. For example, grip our ergonomically shaped tote handles. They are available specifically for either left or right hand individuals.

So that each E.C.E. Plane perfectly shaves wood surfaces to produce finest wood curls, we use high-quality, thick steel for our plane irons. The cutting edge of our 62R /65-R plane irons are precision ground to an exact angle. Bench plane irons also receive a secondary, honed microbevel. Thus, our planes are ready for immediate use out of the box: Just, set the chip thickness and start planeing!

Planes and measuring tools are the primary focus of E.C.E. production. All cantlings (cherry,  white hornbeam, red beech, rosewood, and lignum vitae) are meticulously monitored until deemed thoroughly dry and ready for manufacture.

EACH STEP IN ASSEMBLY IS VITAL.

To always provide world-wide markets with E.C.E. top quality, we leave nothing to chance in our production line.
We consistently focus on proven technologies and targeted processes. The most important factor in this is the E.C.E. staff.  Through their strong commitment and legendary expertise, they bring about the unique characteristics of our tools

At the end of the production cycle, there is a finished product, a masterpiece of form and function, whether it is a plane or one of the many other E.C.E. hand tools from our complete selection.
With each piece that leaves our house, we open new opportunities for woodworkers around the world. We provide craftsmen a complete range of cabinetmakers hand tools, and we do it at various price points.

TRADITIONALLY, WE HAVE BEEN INNOVATIVE.

Above, the sole and body composite plane box of an E.C.E. wood plane is perfectly fashioned to  receive the wooden wedge and plane iron.  To cut the groove we use a partially automated chiselling process.  This proprietary tool was developed within our company.and is typical of other machinery we designed.

Do not leave your tool purchase to chance! Instead, enjoy the long term satisfaction of owning and using top quality products by skilled artisans.

Thank you so much for your interest in our company.
We hope that you will sense the energy that drives us and that you, as an E.C.E. tool user, will experience the same energy and be inspired in your own cabinetmaking.